Pensacola, FL – Over the last month, Triumph Gulf Coast has honored four departing Board Members as their terms have come to an end and celebrated the inaugural four years of investments made in the eight counties most disproportionately affected by the 2010 Deepwater Horizon Oil Spill. The transformational legacy left by these board members was recognized at meetings in Panama City and Pensacola.

Senator Don Gaetz, of Seaside, served as Chair of Triumph Gulf Coast from 2018 – June 2022. As Senate President (2012-2014), he was a driving force in the creation of the Gulf Coast Economic Corridor Act in 2013 which created Triumph Gulf Coast, Inc. Senator Gaetz has been a Panhandle business owner and civic leader for more than twenty-five years. He co-founded and operated a national health care company prior to serving coastal Northwest Florida in the state senate. He was Chair of the Okaloosa County School Board and Superintendent of Okaloosa County Schools as well as Chair of the Town Council of Seaside, Florida. Senator Gaetz was a member of the 2017 Constitutional Revision Commission of the State of Florida. Chair Gaetz was appointed to the Triumph Gulf Coast Board by the Speaker of the Florida House of Representatives.

The Honorable Allan Bense, former Speaker of the Florida House of Representatives (2004-2006), of Panama City, served as the original Chair of Triumph Gulf Coast, Inc. from its inception in 2015 until December 2017. He has held interest in many businesses including road building, mechanical contracting, health care, insurance, general contracting, golf course ownership and management, pavement marking farming and others. He served as Chair of the Board of the James Madison Institute and is past Chair of the Board of Trustees of the Florida State University, the Florida Chamber of Commerce, the Florida Tax and Budget Reform Commission, the Florida Council on Military Base and Mission Support, the Bay Economic Development Alliance, and past Vice Chair of Enterprise Florida under former Governor Jeb Bush as Chair. He has served as a member of the boards of Gulf Coast Hospital, Gulf Power Company, and the Capital City Bank Group (CCBG: NASDAQ). Speaker Bense was appointed to the Triumph Gulf Coast Board by the President of the Florida Senate.

Mr. Ben Lee, of Lynn Haven, is the Market President for Hancock Whitney Bank overseeing the Bay County region. With almost two decades of experience, Mr. Lee provides an array of strategic banking and financial solutions complemented by a proven passion for helping the region’s businesses and nonprofits to succeed. His experience and record of service has earned him a reputation as one of Panama City’s top bankers. Previously, he served as Executive Director at the Office of State Attorney where he was responsible for the management of seven offices in six Florida counties. He directed governmental and legislative affairs and oversaw the offices’ multi-million dollar budgets. Mr. Lee is actively involved in many organizations in the community including the Bay County Chamber of Commerce, Covenant Hospice, Bay County Contractors’ Association, Haney Technical College Education Foundation, Holy Nativity Episcopal School, and the Bay County Half-Cent Sates Tax Oversight Committee. He is the past Chair of the Bay Economic Development Alliance. Mr. Lee was appointed to the Triumph Gulf Coast Board by the Speaker of the Florida House of Representatives to complete the unexpired term of Mr. Robert Bonezzi of Destin.

Mr. Matt Terry, SRA, of Port St. Joe is the owner of Appraisal Group of North Florida which provides real estate appraisals and consulting along the Gulf Coast. He has over fifteen years of experience in the appraisal business. Mr. Terry previously served as Vice Chairman of the Port St. Joe Port Authority, Gulf County Planning Development Review Board, and Gulf County Economic Development Council. Matt also served as lay leader of First United Methodist Church of Port St. Joe and on the Executive Board of Healthy Start of Bay, Franklin, and Gulf Counties. Mr. Terry was appointed by the President of the Florida Senate to complete the unexpired term of Mr. Jason Shoaf of Port St. Joe upon Mr. Shoaf’s election to the Florida House of Representatives.

The transformational legacy created by outgoing Board members has been exceptional. Since its first grant award of $10 million in 2018 to expand the Port of Panama City, Triumph Gulf Coast has awarded more than $350 million to 50 projects in all eight counties disproportionately affected by the Deepwater Horizon Oil Spill.

For every $1 awarded by Triumph, $19 in beneficial economic growth is created for Northwest Florida, resulting in more than $800 million in net new family income annually, an extraordinary return on investment.

Almost 30,000 national industry certifications will be earned by K-12, college, university, retiring military and military spouses in the occupational categories most needed today and tomorrow in Northwest Florida’s coastal economy.

More than 16,000 net new jobs will be created, with all incentivized jobs paying 115% or more of the average wage in the area.

Triumph grants have focused on job creation and workforce developments. Projects include funds to close the deal and win a significant expansion of ST Engineering’s MRO campus at Pensacola International Airport, four new, almost fully sold out, industrial parks in Santa Rosa County and a grant to co-locate Pensacola State College’s new CDL training facility at one of the new distribution parks in Milton.

In rural Gulf and Franklin Counties, Triumph is funding Career Technical Education (CTE) workforce training programs with the school districts and Gulf Coast State College in welding, unmanned systems, agricultural sciences, and nursing, among others, in addition to providing approximately half the funding needed to dredge the Port at Port St. Joe and infrastructure upgrades at Franklin County’s Apalachicola Airport.

Triumph’s first CTE grant was with Wakulla School Board. The project’s success has resulted in three additional CTE grant projects, two of those in partnership with Lively Technical College, for 3rd-12th graders and adults to gain industry certifications in Digital Tools, HVAC, Unmanned Systems, A&P, IT, AI, Auto Repair and construction trades.

Despite natural disasters and world events the Triumph Board has not slowed down in making investments to meet their goal of increasing household income for residents of Northwest Florida.

While we offer a thankful good-bye to these Board Members, we look to the future with our current and new appointees. Current Triumph Gulf Coast Board Members are: David Bear – Chair; Collier Merrill – Vice Chair; Reynolds Henderson – Treasurer; Jay Trumbull, Sr.

Please take notice that on June 28, 2022, at its regular meeting, the Board of Triumph Gulf Coast, Inc., will take up for consideration and intends to approve the following proposal to award funding pursuant to s. 288.8017, Florida Statutes (2017):

Any person interested in being heard on these matters may attend and address the Board prior to a vote on approval of any award. Information regarding the time and place for the June 28, 2022, Board Meeting may be found by clicking here.

Any questions or inquiries regarding this notice or the award may be directed to:
Cori Henderson, Program Administrator at [email protected]

The award comes from Triumph Gulf Coast Inc., a nonprofit corporation that oversees the expenditure of 75% of all funds recovered by the Florida attorney general for economic damages to the state from the 2010 Deepwater Horizon oil spill.

The start-up grant will be funded over a six-year period. The Collegiate Laboratory High School, expected to open as early as fall 2023, will be the eighth lab school in the state and the first of its kind in Bay County.

Please take notice that on May 25, 2022, at its regular meeting, the Board of Triumph Gulf Coast, Inc., will take up for consideration and intends to approve the following proposals to award funding and amendments to existing fundings pursuant to s. 288.8017, Florida Statutes (2017):

Any person interested in being heard on these matters may attend and address the Board prior to a vote on approval of any award. Information regarding the time and place for the May 25, 2022, Board Meeting may be found by clicking here.

Any questions or inquiries regarding this notice or the award may be directed to:
Cori Henderson, Program Administrator at [email protected] 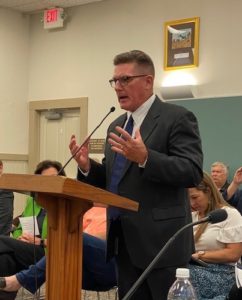 Crawfordville – the Triumph Gulf Coast Board voted unanimously to award a $20 million grant the Wakulla County School Board (WCSB) to create the War Eagle Career Academy, a free-standing facility that will embed Career Tech Education (CTE) training in the curriculum for students in rural Wakulla and Franklin Counties in partnership with Lively Technical College.

The Triumph Board awarded WCSB the Triumph Horizon Award for outstanding innovation and attainment in Career Tech Education.

The Triumph Board moved forward Florida State University – Panama City’s (FSC-PC) $7,600,000 grant request to create a new Collegiate Laboratory High School to serve grades 9 – 12 resulting in at least 2,048 industry certification and dual enrollment milestones. The proposed Collegiate Laboratory High School would be the 8th lab school in the state extending the benefits of having a local, top 20 university to families in Northwest Florida.

The lab school will immerse students in a collegiate culture with supported services and defined curriculum pathways enabling students to earn dual enrollment credits toward a degree. It will also engage students in advanced coursework in the fields of engineering, computer science, cybersecurity, and health sciences, among others, that will allow them to earn industry certifications aligned with local workforce demand.

The FSU-PC Collegiate Laboratory High School will expand the region’s capacity to serve students, especially the growing military dependent population in Bay and Gulf counties. Concurrent to the development of the Collegiate Laboratory High School, the US Air Force is undergoing a multi-billion dollar, rebuilding of Tyndall Air Force Base to be a “Base of the Future.” As part of this massive undertaking, Tyndall AFB will be increasing its military personnel and bringing in new squadrons and families far above their pre-Hurricane Michael capacity.

The Bay County Board of County Commission request for a $2,000,000 property tax reduction grant to support the recruitment of Project Arrow also moved forward. Project Arrow is a manufacturing company seeking to locate in Bay County where they will create at least 100 high wage jobs with a capital investment of at least $45,000,000.

The War Eagle Career Academy to be located at Wakulla High School will provide expand career and technical education for Wakulla and Franklin County in partnership with Lively Technical College (LTC) to meet regional workforce demands at a total cost of $38,900,000. The programs within the academy will prepare students for high-skill high-wage in demand jobs resulting in at least 7,450 industry certifications. The Academy classes will be open to students in grades K-12 during the school day, summer programs and adult students in the evening.

This proposal includes career micro-certifications designed to rupture silos as they exist in education today allowing for CTE integration into existing state curricula, as well as integration of steadily updated and relevant industry certifications. The academic and workforce readiness path will culminate in full post-secondary credentials and an avenue to continue education or seek workforce placement.

The Triumph Gulf Coast Board of Directors is appointed by the Governor, Chief Financial Officer, Attorney General and presiding officers of the Legislature. The appointees to the Triumph Board are David Bear, Allan Bense, Chair Don Gaetz, Reynolds Henderson, Ben Lee, Collier Merrill and Matt Terry. All meetings of the Board are public.